This site presents ONE genealogy of the Greek Gods. “A genealogy” and not “The …” because there is no single version. Each differs according to the authors. From Hesiod to Virgil, passing by Homer without speaking of the multitude of authors who have mentioned the filiations of these different more or less divine entities from Greek mythology.

The reference here is Hesiod. Certain additions are made from texts by other authors, avoiding contradictions. In addition, there are some cult and legendary stories, such as the Trojan War.

We can easily see, in this representation of the descendants of Chaos and in the stories lived by the Gods, Goddesses, Titans, Giants, Nymphs, that their relationships and adventures are not so “divine”. This divine representation of the human society of the time through these myths is a satirical and caricatured representation, often funny or epic, always fascinating.

Here is a family tree of the Greek Gods. All the deities present in this tree are interconnected.
Click on the image for the complete genealogy: 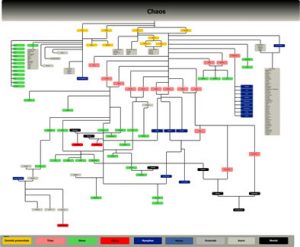 The original website from where all the content is translated is genealogiedesdieuxgrecs.com which is originally in French. The translation will be done I hope soon. But None can know of long this will take… The French version is here to show you what has to be translated.